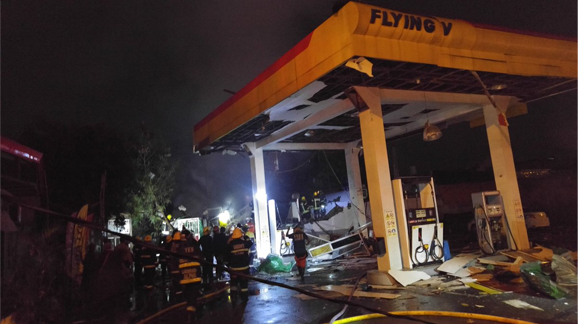 MANILA — One of the six workers of the Omni Gas Corporation who were seriously injured in a fire at the Regasco refilling station in Pasig City passed away on Wednesday night, local officials said.

Senior Inspector Anthony Arroyo, chief of the investigation unit of the Bureau of Fire Protection in Pasig, identified the deceased as William Khey, 39.

The other victims who  were in critical condition were Jeffrey Eugenio, 35 (98 percent burn on the body); and Camilo Alcaraz, Jr, 19 (95 percent burn). The five victims who suffered 90 percent superficial partial thickness burns were identified as Arvin Bautista, 20; Jectopher Cawili, 21; Alejandro Conrad, 42; Domingo Guira, 29; and Raymart Eda, 22.

Most of the the injured victims were stay-in employees at the station within the Omni Gas Corp. compound along Sandoval Avenue.  The compound is owned by the partylist group, LPG Marketing Association.

The blast resulted in a two-hour fire that spread to neighboring establishments, including a furniture shop and a Flying V gas station which sits on a lot shared with the OGS employees’ bunkhouse.

Fire investigators said the explosion that preceded the fire and which resulted in a P20-million property loss, was caused by a gas leak.

In a statement, Energy Secretary Alfonso Cusi said the DOE has decided to revoke the Standards Compliance Certificate (SCC) of the LPG firm because of the fire.

“…The DOE will revoke the company’s SCC because of the incident and that it cannot operate until it is able to secure a new SCC after all pertinent investigations have been concluded to the DOE’s satisfaction,” Cusi said in a statement sent to reporters.

Cusi added they have decided to work closely with the BFP in investigating the fire. “Our common objective with the BFP is to ensure that this does not happen again,” he said.

According to Cusi’s statement, the SCC is issued once an LPG refilling plant complies with the minimum requirements of the  Philippine National Standards for Refilling Plants and the DOE circular on LPG
industry rules.  SFM